skip to main | skip to sidebar

If anyone still reads my blog anymore, you're probably wondering what happened. It's pretty embarrassing I only posted twice last year, and haven't posted at all this year. That's what happens when you have another baby. I actually have a ton of pictures to post but I just haven't gotten around to it. The foxes made a den this year right under our front porch. So I got lots of pictures of cute baby foxes. One day maybe I'll get around to posting them. I may spread the pictures out one a day, to keep stringing any followers along indefinitely, that is, if I ever get around to doing it. Sorry to disappoint. Also my dad's blog is infinitely better than mine so that kind of sucks the motivation out of me, because I can just read his blog instead of posting to my own. But rest assured, posting to this blog is on my to do list.
Posted by Jayla at 6:45 PM No comments: 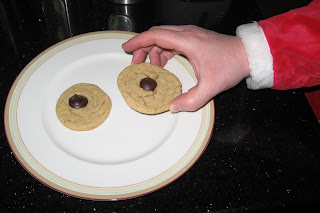 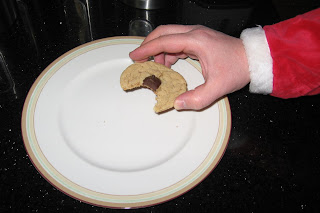 I was a bad girl this year (I only posted once to my blog), but Santa paid me a visit anyway. I left out the bait, and sure enough there was a picture of Santa on the camera trap Christmas morning! Apparently he had already sampled a lot of cookies around the world, because he didn't finish the two we left for him. Next year I think I'll leave out something for Rudolph.

I just got to hold the cutest toad ever. I moved a potted plant out from under the eaves of the house so it would get some rain, and there was a small toad that had been hiding there. Luckily it didn't get hurt as I dragged the pot. I love holding toads. Of course it peed on me, but an inch big toad does not pee all that much. I put the pot back where it was, and put him back, but when I returned with my camera, alas, he was gone. Oh well. I've see toad abodes for sale, but I wonder if toads really would move in. I think it's worth a try.
Posted by Jayla at 10:47 AM 1 comment:

The Night Before Christmas (A True Story) 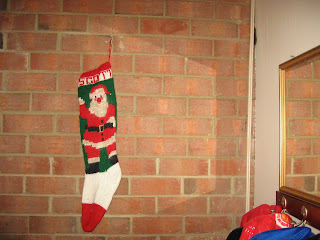 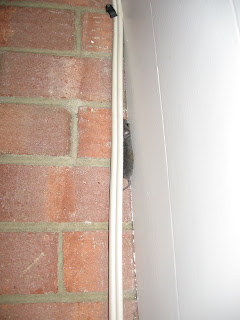 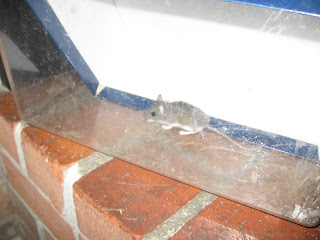 This is my version of Clement C. Moore's "The Night Before Christmas".

'Twas the night before Christmas
when all through the house
Not a creature was stirring, except for a mouse.
The stockings were hung by the chimney with care,
In hopes that St. Nicholas soon would be there.

My child wasn't nestled all snug in his bed,
Television was on, Dino Dan danced in his head.
And I in my kerchief, my husband in his cap,
Made room in our tummies for an apres dinner snack,

When out in the hall there arose such a clatter,
I sprang from the couch to see what was the matter.
Away to the hall I flew like a flash,
Tore open the baby gate and threw up the sash.

The moon on the breast of the old fallen snow,
Gave the luster of midday to objects below,
When what to my wondering eyes should appear,
But a miniature Peromyscus so tiny and dear,
With an orange old cat so lively and quick,
I knew in a moment he had caught St. Mick.

More rapid than eagles my little son came,
And he whistled and shouted and called them by name,
"Now, Phineas! Now, Patty! Now, Daddy and Mom!
The mouse is loose! He's at the top of the wall!"
Now dash away, cats, dash away all!

As dry leaves that before the wild hurricane fly,
When they meet with an obstacle, mount to the sky,
So up to the housetop the dwellers we flew,
With a shoe box, gloves, and St. Mickey Mouse, too.

And then in a twinkling I heard on the roof
The prancing and pawing of more mice on the roof.
As I climbed up the chair and was turning around,
Down into the shoebox St. Mickey came with a bound.

He was dressed all in fur from his head to his foot,
And his coat was all tarnished with dust and with dirt.
A bunch of wet marks the cat left on his back,
And he looked scared like burglar caught opening his pack.

His eyes, how they twinkled! His whiskers, how merry!
His cheek pouches were like roses, his nose like a cherry!
His droll little mouth was drawn up like a bow,
And the fur on his belly was as white as the snow.

The stump of a seed he held tight in his teeth,
And his ears encircled his head like a wreath.
He had a pointy face and a little round belly
That shook when he trembled like a bowl full of jelly.

My husband spoke not a word but went straight to his work,
And put on his coat, then turned with a jerk,
And laying a finger aside of his nose,
And giving a nod, the back door he chose.

He sprang to the shed, to the mouse gave a whistle,
And away the mouse flew like the down of a thistle.
But I heard him exclaim as he scurried out of sight,
"Happy Christmas to all, and to all a good night!"
Posted by Jayla at 7:35 PM 3 comments: 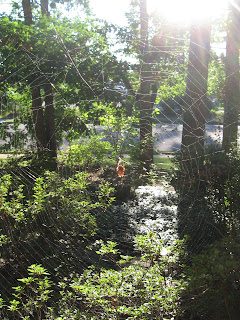 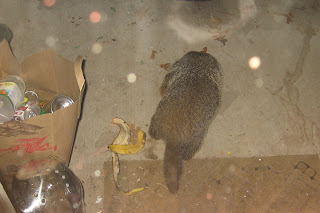 Recently police have been warning county residents about a serial burglar who enters through open garage doors or open doors and windows. I forget the total number of burglaries but it's enough to make you a little on edge. Today I noticed the garage door light flickering on and off, leading me to believe something was in the garage. Turns out its that dirty groundhog again! He was right under the door sniffing a banana peel I had carelessly left on top of the full compost pail. I guess that's what I get for failing to dump the kitchen waste in a timely manner. The other day my husband opened the door to put something in the compost pail, and sure enough the groundhog was right there. All it takes is one time to forget to close the garage door, and sure enough the intruder will take the opportunity to check out the premises and help himself to whatever he wants. 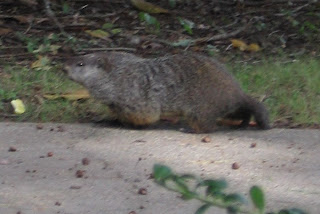 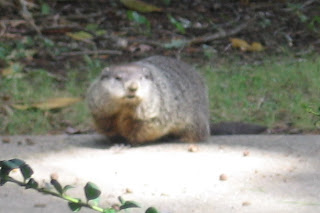 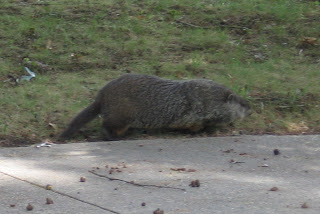 During the blizzard, something dug a big hole under our house. Turns out it's a groundhog. We haven't had one for years. It must have moved in from across the street. It also has a hole under our porch. One day I was trying to get a picture when it was under the porch, and a few minutes later, it appeared on the other side of the house. Either we have more than one, or its burrow goes all the way from the front of the house to the side. I hate to think what it's doing under there, but actually I don't really give it much thought. What's worse is that it eats everything I plant. About the only things I can grow are hostas and mums, both of which it likes to dine on. I just planted a mum covered in flowers and then it ate about half the flowers off. I affectionately refer to him (or her) as "that dirty groundhog!".